June’s Tools of the Trade takes us on a trip into the heart of the English Cotswolds, where we find the small town of Winchcombe and the Winchcombe Pottery.

From this small studio workshop we stock a selection of hand thrown pouring bowls, in three sizes and two glazes. These beautiful bowls are fired in a wood-burning kiln, and it is this firing process which gives each bowl its unique appearance. Irregular colouring and scorch marks created by the smoke, soot and ash characterise each object, and the resulting depth of colour and complexity means no two bowls will ever be exactly alike.

The outside surfaces are left unglazed, revealing to the touch the rough clay surface, while inside one of two glazes is used: The clear glaze reveals more of the natural wood-fired colouring inside the bowl, while the dark tenmoku-like glaze adds depth to the finish, the oxidisation process creating its own irregular patterning in shades of brown and black.

Customers - and staff - will often deliberate long and hard over which particular bowl to buy, as each one is truly a unique item.

The Winchcombe Pottery can trace its history back to 1926, when a 25 year old potter named Michael Cardew rebuilt and reopened the local Becketts Pottery. Cardew had trained under Bernard Leach, the man responsible for the rebirth of craft pottery and the Studio pottery movement in the early years of the twentieth century; Leach believed that the potter’s focus should not be on decoration or embellishment but in the tactile and functional perfection of objects designed for everyday use, and Cardew’s ambition was to reopen the pottery as a place where traditional, functional and affordable wares could be made for the local population. To help him in his task, Cardew hired two men; Elijah Comfort, the 63 year old chief thrower at the Becketts pottery, and 14 year old Sydney Tustin, a local lad whose first task was to turn the wheel for the elder potter. As the pottery established itself, the team expanded, Sydney’s brother Charlie Tustin joining in 1935 and Ray Finch a year later. Finch, from South London, had originally travelled to Gloucestershire to find work at the pottery in 1935 but Cardew instructed the young man to learn his skills first, so Finch studied at Central Saint Martins before joining Michael, Elijah, Sydney and Charlie at Winchcombe. Cardew himself, however, only stayed at the pottery for another three years before leaving for Cornwall where he set up the Wenford Bridge pottery, and so in 1939 Ray Finch took over the running of Winchcombe.

The team at Winchcombe in 1947 - Ray Finch is standing on the left.

In 1974 Finch and Winchcombe opened their first wood-fired kiln, establishing the process which defines Winchcombe pottery today. The wood firing introduces the essential element of random to the process, transforming the local clay into functional, practical, unique objects. Earth, water, wood, fire and ash, feldspar, limestone and iron oxide; the ingredients which create the magical transmutation which is stoneware pottery. So what tools are used in the production of these bowls? Ray’s son Mike explains them for us:

“On the left side is a wire for cutting off the pot from the wheel. The top and bottom middle are metal banding strips used in trimming and turning leather-dry pots, as is the paint scraper in the centre.”

“The wooden rib on the right is for smoothing throwing rings - especially on the inside of bowls." Each bowl is hand thrown and hand finished, before being stamped with The WP mark that signifies the Winchcombe Pottery. 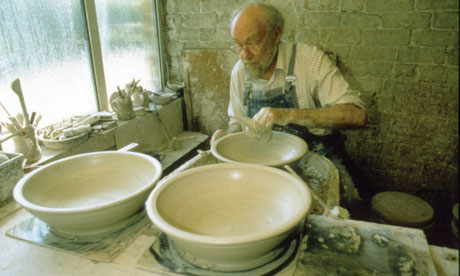 Sadly, Ray Finch passed away in 2012. He had worked at Winchcombe for over 70 years and trained and inspired generations of potters. A website has been set up to celebrate his life and honour his achievements - Ray Finch 1914 - 2012.

Mike and his team are carrying on the tradition established by his father and the original potters, and still make their wares in the same way. Hand thrown, hand finished and wood fired. Our thanks go to Mike and all at Winchcombe for sharing their tools and their story with us.

Unfortunately due to the unique and varying nature of these items and their limited availability we are unable to sell them on our website. If you are interested in buying one you can visit our Redchurch Street store or email us using info@labourandwait.co.uk.

For more information on Bernard Leach and studio pottery you can read our story about the Syussai Pottery here.